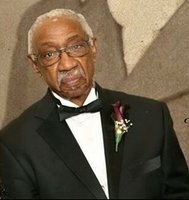 Trustee James Earl Johnson, Sr.
"Precious in the sight of the Lord is the death of His faithful servants." Psalms 116:15
On Friday, August 23, 2019, at 7:35 p.m., James Earl Johnson, Sr., quietly and peacefully transitioned from this life
to life eternal.
The second of six children, James Earl was born on June 27, 1936, to the Late Essie and Milous Johnson in
Abbeville, South Carolina. James’ foundation in Christ began at an early age, where he attended the St. James AME
Church in Abbeville. He attended the Abbeville County Training School (Abbeville High School). In 1956 James
enlisted into the United States Army Reserves, and from there was called into active duty by the United States Army.
After being discharged from the Army in 1957, James Earl migrated to New York City to live with his sister, Anna.
James Earl’s mack game was super tight. He met the love of his life, Ella, through her sister, Lula. Upon hearing
about Ella from her sister, he declared that he would marry her (Meanwhile, Ella was unaware of this, as she was still
living in Linden, Alabama and did not know him yet). When she finally migrated to New York, James began his
courtship with Ella. He would give a quarter to her siblings, Jerry and Alton, to call her outside so he could talk to
her. James also joined the Fountain Church of Christ Disciples of Christ, where Ella and her family were members.
James and Ella were finally joined in holy matrimony on January 24, 1959, thus successfully executing his mack
strategy. To that union was born four children: James Earl Jr., Sheree (deceased), Yolanda, and Kenneth.
James believed in working hard to provide for his family. He was employed by Antigo Auto, where he manufactured
automobile parts. He retired from the New York Board of Education as an engineer fireman.
James was a sportsman and loved the outdoors. He played baseball with an amateur team. He also enjoyed hunting.
However, James is widely known as an avid fisherman, a love that was cultivated by his mother. James spent
countless hours on the water with his friends, John Pearson, William Spivey, and Joe Copeland. Even in fishing, he
showed gratitude for God’s blessings, as he and his fishing buddies would often take a moment to have a praise break
on the boat. James would share his catch with friends and family. He insisted on hosting a fish fry that was strictly for
ministers at his home every year. Not only was James a fisherman, but he was a skilled cook. He was known
especially for his chili.
James was not only a disciple in name, but also in deed. He was one of the founding members of the Rose of Sharon
Church of Christ Disciples of Christ, where Willie S. Rouse is the pastor. There, he served as a trustee and the church
treasurer. James later joined the Little Branch Church of Christ Disciples of Christ when his wife received the call to
pastor. There, he served as a trustee. At Little Branch, he was affectionately referred to as “The Duke”.
The true testament of love is found in the way one speaks of their spouse. James loved Ella. It is evident in the way
her eyes sparkle when she talks about him. Their love story spanned the course of six decades. He constantly lavished
her with gifts, and supported her wholeheartedly in all her endeavors, both secular and spiritual.
James Earl Johnson, Sr., was preceded in death by his daughter Sheree and his brother Milous Johnson. James leaves
to cherish and celebrate his legacy, the love of his life and wife of 60 years Ella Mae Richardson-Johnson; two sons:
James, Jr., and Kenneth; his one and only daughter Yolanda A. Copeland; one son in love Joseph C. Copeland, Sr.
and two beloved daughters in love Joyce Johnson and Josette Johnson. He leaves five siblings, Mrs. Anna Smalls, St.
Albans, New York; Mrs. Estella Mitingua (Sekizee), Raleigh, North Carolina; Mr. John Johnson (June), Paramus,
New Jersey and Ulysses Johnson (Terrie) Raleigh, North Carolina; 14 Grandchildren: Tetikwa Horace; Joseph C.
Copeland, Jr., Quentin O. Copeland; Nemesis Clinkscales; Elliott K. Copeland; Nebiyah H. Steward (William);
Shelbie Howland; Naaman A.S. Copeland; Marquis Clinkscales; Khalil Johnson; Janai S.E. Johnson; Andrew S.
Copeland; Nasir G. Johnson, and Nathaniel Johnson. 13 Great Grandchildren, Godchildren: Sheila H. Gillams, Toya
Brown, Martin and Lynda Brown, Joyce Y. Lemon (Michael); best friends (Fishermen): John Edward
Pearson(Claudia), Joe C. Copeland(Annie) and Mr. William Spivey, and a host of Nieces, Nephews, Spiritual
children, Church family, and Friends.