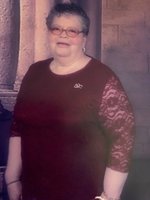 Shirley was born on September 4, 1935, to the late William and Grace Thompson in Griggstown, NJ. She was one of eleven children in a family of three sisters and seven brothers. Shirley lived a delightful and blessed eighty-five years.  She departed this life on January 11, 2021 at home, surrounded by her loving family.

Shirley was educated through the Franklin Township School District.  Although Shirley had to leave school as a young lady, her perseverance to achieve her High School Diploma in 1977 was a great accomplishment.

Shirley grew up with a young man who pulled her hair and teased her as a girl, later to find he would profess his love, and ask for her hand in matrimony.  Shirley married William Henry Antonio Burnett on August 7, 1954.  They were blessed with eight wonderful children. They started their family in Little Rocky Hill, and later moved to Monmouth Junction.

She attended the Mount Zion AME Church in Little Rocky Hill since the age of 12 and later became a devoted member. As a member of the church, through-out the years she served faithfully in several ministries. She sang in the choir, served as a Steward, a Trustee, and as a member of the finance Committee. In addition, she served as President to the Missionary Ministry.  She led this group by reaching out to those in need. She brought cheer and comfort to individuals in the hospitals, nursing homes, prison, and kept in contact with the ones who were confined to their homes. As a member of the Golden Club, her dedicated service included sending flowers and cards to those who were sick and shut in. She played an instrumental role on the Kitchen Committee.  Shirley’s service was not only committed to her church, but also to her community. On a voluntary and professional basis, she provided service for the senior citizens in the South Brunswick Township area for over twenty-five years. Community service included working with the Head Start Program, working the Election Voting Polls, and being an advocate for the local NAACP.  She shared her interest in supporting the community in any capacity she could.

Shirley worked as a housekeeper early in her life and then became a bus driver for Convers Busing for 6 years, before transferring to the South Brunswick Township Transportation Department for Senior Busing for over 25 years.  Shirley honked her horn for the last time and retired in June of 1999.

Shirley was a virtuous woman, and an amazing caregiver for her siblings or anyone in need of consoling, care, or love.  She was always willing to assist anyone in need, even if she had to call in favors from family and friends. Shirley always had an open door for everyone.

She adored her kids, but her grandchildren were her life.  She made it clear, if anyone would mess with one of her children or grands, you would have to meet Took.  Ms. Took didn’t play when it came to her family.  It was known when she was going to have a TOOKIE, you’d better look out!

Spending time with her kids and grandchildren was always a blissful time for her.  She also loved traveling and enjoyed road trips and cruises. During the summer of 1999, she traveled to Abidjan, Africa in support of her granddaughter’s involvement in a multi-cultural scholar athletic program.  When she traveled, she always made it her business to find a collector’s plate for her souvenir shelf in the kitchen.

Everyone knows a good “Sneaky Shirley” story. At every event she would always coax a little kid into sneaking a cookie, a muffin, or cake and leave it on the table next to her. When she was trying to hide something from William she would whisper “Shhh, leave it in the car until it’s a clear get away from Pop.”

So, if you knew Shirley “Took” Burnett you knew a great woman who was loved by all!