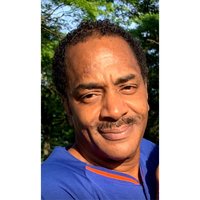 Mario Andre Watkins affectionately known as “Mussie” (derived from “must eat”) was born on April 14, 1962 in Newark, NJ.  He spent much of his life as a New Jersey resident between Newark & New Brunswick.  He was an individual that valued spending quality with his children, family and those he loved.  He was very loving - always smiling and enjoyed making others laugh.  In addition, he had an uncanny ability to smile through his toughest times because of his desire to make everyone else happy. There are many vivid memories of his often silly personality that brought joy to everyone’s heart. He was a great cook and enjoyed cooking for his family. His fried chicken was well known to be the best.

Mario was a talented painter and artist - always paying close attention to the small details of his artwork. He thoroughly enjoyed teaching and sharing his passion with others - investing much time in teaching his younger children to draw and paint.  He was able to expand his gifts and utilize them professionally by commissioning his work to individual clients and painting for small businesses. Mario was a hard worker. It was important to him to provide for his family and he did so through various jobs including security & surveillance, cleaning services and property maintenance.

On the morning of Saturday March 21, 2021, Mario entered peacefully into eternal rest in his home.

He is survived by his Children: Denise Vandervoort, Mariel Samples, Mario Andrews, Mario Thorne, Adriyah Ellis-Smart, Breonna Ellis-Jones and Andrew Ellis. In addition, he became a father figure to others who called him “Daddy/Dre” including Faheem, Shakiema, Sharief, and Tejal.

He leaves behind 11 grandchildren - a host of nieces, nephews and great nieces and nephews.

He also leaves behind many loved ones and friends including “Ms. Don” who supported and cared for him in his latter years.

To honor Mario’s wishes, his remains will be cremated. He will be greatly missed by everyone who came to know him.