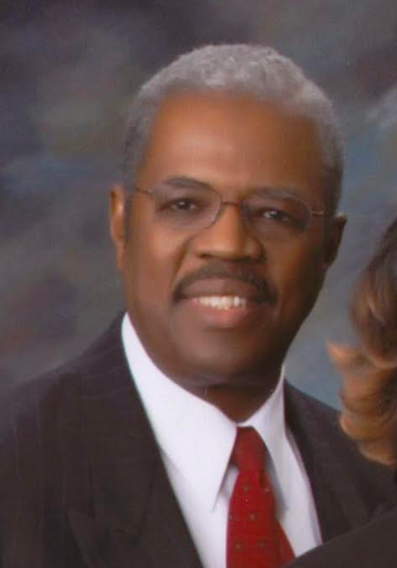 Reginal John Johnson was born on January 4, 1946 in Newark, New Jersey to Lester James Johnson, Sr. and Anna Johnson(Annie Robinson), affectionately called “Reggie,”he was the youngest of five children. Reggie spent his childhood in Newark, growing up in the James M. Baxter Terrace Public Housing Complex. He and his family later moved to a three-family home on South Orange Avenue. Reggie graduated from Newark Central High School in 1963, becoming the only one of his siblings to achieve this educational milestone.  Though Reggie did not realize it until many years later, his father, who never missed a day of work, took the day off toattend his graduation; a true demonstration of how proud he was of his youngest son.

After high school, Reggie enlisted in the U.S. Air Force at the age of 17. As he tells it, “I didn’t like my father’s rules, so I had to get out of my father’s house.”Reggie served honorably as an Air Policeman from 1963-1967. During his time of service, Reggie was stationed in Maine, Taiwan, and Florida, seeing parts of the country and a piece of the world that this young man from the “projects” of Newark likely never imagined.

As a child, Reggie dreamed of one day becoming an engineer. Though he did not realize this dream, Reggie went on to achieve a successful career in the field of Computer Information Systems.  In 1969, with only a high school diploma, he began working at the National Cash Register (NCR) Company in Elizabeth, NJ as a Programmer Analyst, at a time when many doors were closed to African Americans without a college degree. Reggie enjoyed the challenge of programming and it provided the means of building his self-esteem and separated him from his peers as an excellent, talented worker. He was also afforded the opportunity to move up the corporate ladder into management positions. As the only African American at this level, he had to be “twice as good” as his White counter parts. This, however, did not deter him, but inspired Reggie to be more determined to exceed their expectations.

To further hone his skills and establish credibility in his career field, Reggieearned an Associate in Applied Science degree in Computer Science in 1981 from Middlesex Community College. Soon after, he was hired as an Information Technology Manager at the Sherman and Sterling Law Firm in New York, New York, where he worked from 1982-1986. In 1987, Reggie was hired as the Data Processing Manager for BEA Fasteners in East Hanover, NJ. It was during this tenure at BEA, that he traveled around the country: North Carolina, Tennessee, Mississippi, and California. Reggie’s career continued to soar as he went on to work as a Data Processing Project Manager for the City of Trenton from 1992 to 1997. He managed the data center and provided analyst and program support for computer and PC systems for the city and water department. Other than being a dad, this was Reggie’s most rewarding job!

In 1983, at the age 37, Reggie accepted Jesus Christ as his personal Lord and Savior when a young woman witnessed to him about the joy of Christ and he realized that he did not have that joy. Reggiejoined First Baptist Church of Lincoln Gardens in Somerset, New Jersey, and as a new convert, Reggie was eager to learn more about God and His Word.  He signed up for Reverend Chet Smith’sbible study and became involved in evangelistic outreach through street witnessing and mentoring young boys at the SkillmanJuvenile Detention Center.  Reggie was on FIRE for the Lord and there was no stopping him!

Reggie was a faithful member of The Gideons International Association for several decades.  He had a passion for sharing the Word of God and deeply believed in the transformative power of the Gospel. Reggie faithfully distributed God’s Word in hospitals, hotels, prisons, army recruiting facilities, and wherever the opportunity presented itself.

As Reggie grew in the Lord, his faithfulness and commitment to serving the Lord abounded.   He started a men’s Bible study on Saturday mornings.  Reggie worked with Sister Ellison in establishing a prayer line in the old church. He faithfully went to the church each day before taking the train to work in New York Cityto “switch the prayer line.”Reggiewasfaithful over a few things…

Reggie was a man of mighty valor.  He was called to the Deacon’s ministry in 1987 under the leadership of Senior Pastor C. H.  Brown, Jr. Reggie served on various committees in the ministry and as Vice Chairman of the Deacon Board.  He was the chief architect of the Deacon training program.  Reggie was a critical and thoughtful thinker, gifted with wisdom, knowledge, and invaluable leadership skills.  As a Deacon, twice a month Reggie went into the North Brunswick correctional facilities teaching a Bible study class and spreading the Gospel.He lived his faith and was a doer of the Word.He served as a Deacon faithfully for 32 years and even during his season of health challenges, Reggie’s commitment to serving the Lord was unwavering.The Deacon you saw on Sunday morning is the man that you would also see the other six days of the week. He held the office of Deacon in high esteem; being a servant and warrior for the Lord, the Pastor, the Church, and the Community.

He leaves a powerful legacy for the Diaconate.

He was the consummate Deacon.

As a lifelong learner, who loved the Word of God, Reggie began his matriculation at Philadelphia Biblical University in 1996. With a full-time job; a loving wife and two young children at home; along withthe demands of church ministry, it was after seven years of traveling to and from evening classes in Philadelphia, that Reggie, his mother and father’s only child to graduate from high school,was awarded a Bachelor of Science Degree in Bible on May 3, 2003.Reggie’s concentration was in Christian Counseling and with this degree, he went on to begin a second career working at the New Jersey Department of Youth and Family Services. He found joy in working in the foster care and adoption programs and touched the lives of many children to whom he was charged.

Reggie’s servant spirit was a true calling. For the last few years, Reggie cared for, provided support to and oversaw the well-being of Deacon Emeritus Chester Smith. They both enjoyed singing and spent time sharing in song. Deacon Smith had been a mentor to him as a new deacon and was the father of Reverend Chet Smith, Reggie’s first Bible study teacher, when he was first joined First Baptist.  It was a beautiful, God-ordained relationship.

Reggie enjoyed photography, particularly taking pictures of nature, lighthouses, and historical sites. One of his favorite ways to spend his time was editing his pictures and the enjoyment using his creativity gave him. Reggie loved to travel domestically and internationally with his wife and dear friendsJames and Tanya Johnson, their “cruise buddies.” Their current bucket list included traveling to all 50 states. His wife will take Reggie’s spirit with her as she continues their traveling journeys.

Everyone who knew Reggie will remember him as an illustrious storyteller, with a knack for detail and a little embellishing. He loved a good joke, had a witty sense of humor, and a deep roaring, side-splitting laugh that was truly infectious. Reggie LOVED to sing! You always knew he was in the ‘house’ or the ‘building.’Reggie was blessed with a rich, baritone voice.  His work colleagues shared that Reggie always had a song in his heart and a smile on his face. He also shared his gift with the First Baptist Church’s Male Chorus for several years. Reggie sang to his beloved wife all the time, and his three daughters will cherish the memory of their Dad singing This is My Prayer for Youto them on each of their wedding days.

To send flowers to the family or plant a tree in memory of Reginal Johnson, please visit Tribute Store
Print
Sunday
5
May