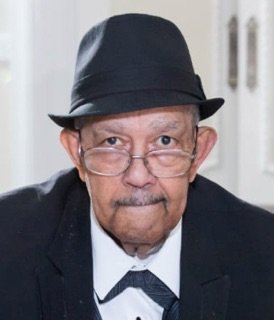 Thomas and Lloyd went to Jamaica in the hopes of discovering their Jamaican roots, he was told that there was the possibility of a Grandmother who left Cuba and had settled in Jamaica.  We don’t know if he was successful but we do know that he lived for three years with Margaret and Rufus Gayle in Aenon Town, Saint Ann, Jamaica.

Leaving Jamaica during his early twenties, Thomas served with his brother Lloyd as Quartermasters on various ships including the SS Yarmouth out of Boston and the cruise ships SS Queen of Bermuda out of Nassau and the SS Bahama Star traveling from Miami to Nassau.

With his good looks and easy manner, Thomas successfully navigated and travelled the world, learning multiple languages, Arabic, Spanish, Portuguese, French, Italian and English to name but a few.  Returning to Jamaica he changed career and worked as a Foreman at the Bauxite Plant (formally ALCAN), Ewarton, Jamaica.  While working there he met my mother Maisie Plunkett and I, Bolevia born July 31, 1954  am the product of that union which unfortunately did not work out.

Thomas met Tryphene in Spanish Town, Jamaica and after she finally said yes with the blessing of Miss Vie (Goddy) Tryphene’s mother they were married on October 23, 1957 and started a family soon after.  Hanif born May 1,1958, Paul born September 22, 1959 and Sandra born May 5, 1961.

Seeking a better life for his growing family Thomas migrated to the United States settling in Jersey City where he found employment at Baldwin Steel as a Foreman.  After purchasing a home at 262 Woodlawn Avenue, Jersey City Daddy brought the family from Jamaica on April 24, 1971 to the US.  The first child born as a US Citizen Avril arrived on April 6,1970, followed by Francine the baby born February 4, 1972.

Comarcho was always the life of the party and at Woodlawn Avenue there was always music playing and people visiting.  Almost every weekend there was a reason to celebrate life at the Comarcho’s house but don’t get it twisted Comarcho ran a tight ship (pun intended)! We were expected to know how to cook, garden and clean house to Reggae music.  He made sure his kids knew the meaning of order.  You can still see his style in all the homes of his children as we have our children cleaning whilst bobbing to Reggae music on a Saturday morning

As for dominoes what can be said, he was the absolute champ who taught his children, grandchildren and even great grands to play and in his later years would let them win a game or two.

Daddy’s favorite shows were Jeopardy, Wheel of Fortune and Dancing with the Stars. When those shows came on you would always find him sitting in his easy chair surrounded by his grandsons Eric Jr. (EJ), Carlo and Antonio who knew to be quiet when they heard the music for those shows.  Daddy was also an avid NY Yankee and Miami Dolphin fan.

Our father loved to dance as was evident by his recent moves at Andrew and Alexis’s wedding and was also a great connoisseur of Classical music.

Thomas & Tryphene retired to Ocala, Florida but due to ailing health in the Spring of 2003 returned to New Jersey.

Thomas especially loved his family and will be missed by all who knew and loved him.