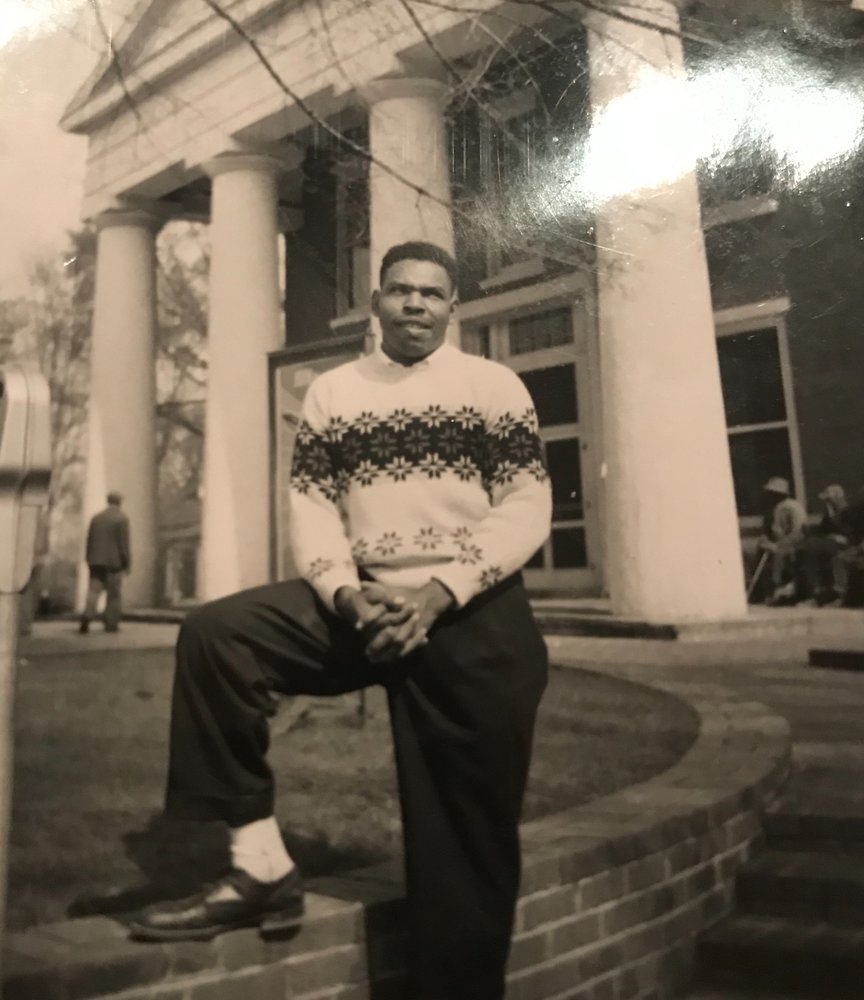 Schulyer E. Travis, Sr. was born on April 30, 1923 the son of the late Hazel Easter Travis and Samuel D. Travis. He was the second eldest of eight (8) children, and the eldest brother.  He received Jesus Christ has his Lord and Savior in the latter years of his life.  Schuyler peacefully departed this world on November 2, 2020, where he is now in the presence of our Lord.

Schuyler was affectionately known as “Scooter” to his beloved late wife Elizabeth, and “Schoola” to his extended family. Schulyer’s education was completed in the countryside of Lawrenceville, VA; followed by enrollment into C.C. CampArmy.  As the eldest son, Schuyler was unable to attend High School, as he was needed to help his father on the family farm.  One of his main responsibilities, which he enjoyed was caring for the horses.  The majority of his education was self-taught through books, newspapers and life experiences.  He had many hobbies, and enjoyed baseball, music, and watching the horse races. As a young adult he was a short-stop for the Negro League Baseball Team in Newport News, VA; and many of his games were reported in their local newspaper.

Schulyer later moved to Marcus Hook, Pennsylvania for better job opportunities.  While residing in P.A., he receivedsaxophone lessons, which he later mastered.  His talents allowed him to earned extra money by playing the saxophone with a small local band. He also cherished the time spent with his Godchildren, Levi Jr. and Ethelda (Gloria). He played the saxophone and encouraged Levi Jr. to play the trumpet, which landed Levi Jr. with a college scholarship. He was like another Dad to Ethelda (Gloria); and adored the time he spent tossing her into the air. During his free time, he worked at a local mechanic shop where he learned to fix cars. He enjoyed shooting pool after a long day of work with his co-workers. This was also a special time in his life, as his cousin introduced him to Elizabeth.

Schulyer and Elizabeth courted, and later married in August 1958, and was happily married for over 60 years.  Throughout their loving marriage, they had two children, Schulyer Jr. and Vernel.

During the 1940’s and 1950’s, Schulyer was employed by Viscoe.  During the 1960’s through retirement, he was employed by National Lead Industries as a steel worker. Throughout his life he was always seeking knowledge.  He was skilled in plumbing, electric, carpentry, and trucking, but known as a jack of all trades.

He was known by many as a very wise, fair, and intelligent man with a deep love and devotion to his wife and children.  He most enjoyed spending quality time and traveling with his family. He always stressed the importance of education, independence and being the best at your profession.  His grandchildren knew him as Pop-Pop, he attended their games, practices, class trips, took them on vacation, rewarded them when they achieved good grades and always offered words of encouragement.  By God’s grace, he was also blessed to spend memorable times with his great-grandchildren as well.  Many of his nieces and nephews also cherished the summers they spent with their Uncle. He had a kind and giving spirit and was always willing to help. Everyone knew to call Mr. Travis, when their car needed to be fixed or when they were stranded.  He enjoyed working on cars at his friend’s mechanic shops. He was also the father that played ball and went hunting with his son, played with the neighborhood children, transported his baseball team to and from practice and games.  He was the loving father that took time to take his daughter and her friends, shopping, skating, band practice or treats at McDonald’s and ice cream. He always loved his McDonald’s “black” coffee and apple pies.  Schulyer and Elizabeth also spent many summers taking the neighborhood children to see the July 4th fireworks.  He had a heart of gold and was respected by all!

The Travis Family would like to thank everyone for all of your support, kind words, and prayers. We give thanks unto our God that he may keep you in his perfect peace now and always.

To send flowers to the family or plant a tree in memory of Schuyler Travis, please visit Tribute Store
Print
Wednesday
18
November