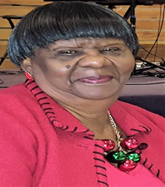 Please share a memory of Bernice to include in a keepsake book for family and friends.
View Tribute Book

Bernice Eleanor Chamberlain was born on April 18th, 1926, in Sharon Hill, PA. She was the fourth child of 14 children born to the late Augusta and Vallie C. Robinson. She entered eternal rest on July 29th, 2021 at the age of 95 years old. She accepted Jesus Christ as her personal savior at an early age. After her family moved to New Jersey from Pennsylvania she attended First Baptist Church Lincoln Gardens, Somerset, NJ, eventually serving as Secretary for the Church Sunday School. She transferred her service to the Lord by becoming a member of Sharon Baptist Church, New Brunswick, NJ, to serve alongside her mother, Vallie, who was already a member of Sharon. Bernice maintained her membership at Sharon Baptist Church until the day the Lord called her home.

Gifted with a voice to sing, Bernice was in two (2) gospel singing groups that appeared on radio shows. Bernice may have been small in stature, but she had a strong and mighty voice. Although her voice was often compared to that of Bessie Smith or Mahalia Jackson, she had a style of her own, endeavoring to do things her own way; especially when it came to belting out gospel songs in her robust bluesy way. She was a member and past president of Sharon Baptist Church Gospel Chorus, as well as a member and soloist for its Senior Choir. On many occasions Bernice was invited to participate on programs as a soloist. She was also a member of the Missionary Society at Sharon Baptist Church.

Bernice worked as a teacher’s assistant for the Head Start program where she received honors for her good work ethics and a recommendation and approval for the position of Head Teacher. Bernice was a community activist and was one of the first to implement busing for the school children in her neighborhood. She advocated for many citizen rights, especially for those of the children in her community.

Bernice was married to the late Ernest L. Chamberlain, Sr. for 60 years and from this union seven children were born. Bernice enjoyed traveling on road trips with her husband Ernest, their children, grandchildren, and others. Over the years, in their motorhome, they logged in thousands of miles that took them to various destinations all over the United States and Canada; often visiting family, friends, or just traveling for the joy of picturesque sightseeing.

To send flowers to the family or plant a tree in memory of Bernice Chamberlain, please visit Tribute Store
Print
Friday
13
August