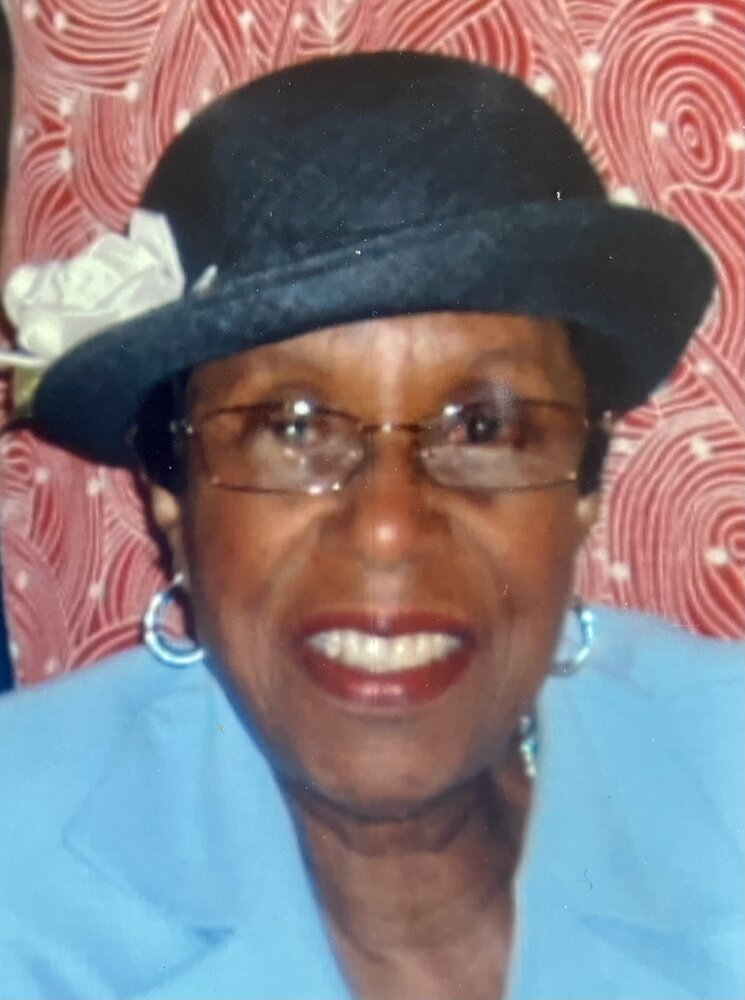 Please share a memory of Mary to include in a keepsake book for family and friends.
View Tribute Book

Deaconess Mary Merritt (nee Toon) was born January 25, 1929, in Cumberland County, North Carolina to the late Thomas Jefferson Toon and Alice Elizabeth Ross.  Her siblings– Naomi, Louella, Jerry, Arleatha, Taft, John, David, Florida and Margaret preceded her in death. Mary demonstrated an early talent as a singer and became a frequent soloist in church from the time she performed her first solo at the age of three.

A part of the Great Migration of Black people traveling from rural southern communities to northern cities seeking freedom and opportunity, Mary found her way to Hackensack, New Jersey in the late 1940’s, where she spent most of her life.  Soon after graduating from Hackensack High School, where she was a member of the glee club, Mary began her lifelong service to the Lord through her ministry of song.  She sang with various choirs at New Hope Baptist Church, and at Mount Olive Baptist Church where she was appointed a deaconess in 1981.  Often the featured soloist, her rendition of her signature song, “Already Been to the Water,” is legendary.

During the early 1950’s, Mary met and fell in love with a young and talented Christian man, the late Reverend Clarence Merritt.  He could preach; and she could sing and cook – a perfect partnership which lasted nearly 60 years.  Mary and Clarence were united in Holy Matrimony on May 4, 1957.  To this union was born their daughter Monica.

Mary worked in retail for 42 years.  She took great pride in her job as a sales professional in Macy’s lingerie department in Paramus.  A “people person,” she enjoyed her customers; and her success led her to become the department’s “go-to” professional, serving generations of soon-to-be married women, who made it a tradition to seek out her advice in selecting the most personal items for their bridal trousseau.

The combination of Mary’s love for people and passion for cooking was perfectly compatible with her husband’s desire to host Sunday dinners at the family’s home, following church services.  Proud of her culinary talent, Mary was pleased that her popular coconut cake and potato salad specialties were favorite requests of family and friends.  While she welcomed these gatherings, she enjoyed dressing to the nines no matter the occasion.  A fashionable woman, she invested in her clothes and was often seen wearing a favorite strand of pearls.

After her husband’s death, Mary relocated to Somerset, New Jersey where she lived with her daughter Monica for four-and-a-half years.  There, they created beautiful memories, which included fun times watching Mary’s favorite television programs:  Court TV, The Wendy Williams Show, and enjoying classic and original dramas on Lifetime Movie Channel.

With her health waning, a remarkable network of friends became her village, known affectionately as “the Firm and Friends,” stepping forward to help at a time of significant need.  Two of her Firm daughters were also hospital administrators which ensured that Mary received VIP treatment during any hospital stays.

The members of this invaluable support system that included a dear friend, Donna Burnett were on hand to prepare meals and provide rides to the hair salon – and they offered their company whenever “Mama Merritt” needed it.  Mary loved those visits, especially when her guests brought her treats of chocolates or dessert!  She would often say to her daughter, “You have the nicest friends.”

On January 25th, friends and family members gathered to celebrate her 93rd birthday with a grand celebration, bringing flowers, gifts, money (which she deftly tucked away for safe keeping and future use!).  Shortly after, on February 5th, at RWJ Barnabas in New Brunswick, New Jersey with her daughter at her side,

Mary Merritt went home to be with the Lord.

Mary will be sorely missed at family gatherings, where she often sang hymns to the beautiful piano accompaniment of her nephew Isaiah.  She leaves to cherish years of wonderful memories: her daughter Monica Weeks; grandson Tyler Weeks; her brother Luther Toon; daughters through love, Linda Wright and Gracie Williams; granddaughter through love Niya Duncan; Goddaughter and niece Debbie Toon; devoted cousin Lucille McMillian; The Firm and Friends, and a host of nieces and nephews; many friends; and her beloved church family at Mount Olive Baptist Church.

To send flowers to the family or plant a tree in memory of Mary Merritt, please visit Tribute Store
Print
Tuesday
15
February