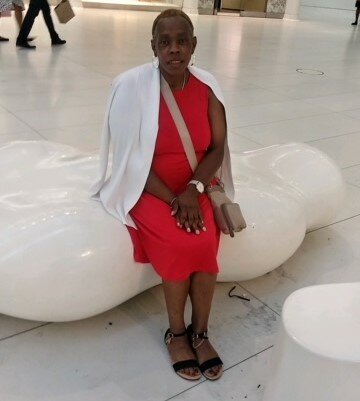 Please share a memory of Sheila to include in a keepsake book for family and friends.
View Tribute Book

Sheila Vera Molson better known as “Sissy” was born October 4, 1959 at Middlesex General Hospital in New Brunswick, New Jersey. She was proceeded in death by her parents, Lester “Schoolie” and Gertrude McKenzie. From a young age, Sissy loved to be outside in the neighborhood playing games especially her favorite sport, softball. Those who knew her at an early age remember how well she played jacks. Sissy could always be found playing catcher for her high school softball team or as a short fielder on “The Mean Machine”, the local softball team, in her adult years. She then coached her brother’s softball team for years after she stopped playing herself.

Sissy attended New Brunswick public schools graduating from New Brunswick High School playing on the Zebra’s softball team throughout her years. She graduated in 1977 and quickly entered the working world as a Secretary at Damon House in New Brunswick. Sissy then decided to switch career paths and began working for Pressman Toys Inc. as a Warehouse Associate and continued to work there for 22 years.

After Pressman Toys Inc. closed their doors for good, she continued to work as an associate in various warehouses. Her strength, tenacity, and determination led her to return to work while still fighting her illness. Sissy was determined to “keep moving” despite any limitations put on her. In her last position as a Team Lead, she excelled as a leader and mother to many of her coworkers.

Sissy was no stranger to hard work and was very talented. One of her many gifts was doing hair and anyone that knows her knows you can always find Sissy doing someone’s hair. This talent allowed her to express yourself and connect with so many people. Sissy did not love to do hair. She loved to connect with people, make them laugh, and help them even if that meant just doing their hair.

Sissy was a loving and caring soul. She loved unconditionally and authentically. She will always be remembered for doing some silly dance that had everyone laughing and cheering her on or in her serious mood reaching out to help someone in need. Her spirit was so warm and filled everyone’s soul and heart. She embraced everyone and had an affect on anyone she met. She was selfless always addressing the needs of others before herself.  Her often heard mantra was “Don’t worry about me. Go on and live your life to the fullest”. Sissy was an amazing woman, wife, mother, daughter, sister, aunt, niece and friend. She will forever be missed and cherished.

The family would like to give a special “Thank You” to Misty Ingram whom was like a sister to her and mother of her two Godchildren, Aaron and Ayden and Malika “Miki” Britton, her niece.

To send flowers to the family or plant a tree in memory of Sheila McKenzie-Molson, please visit Tribute Store
Print
Sunday
15
May