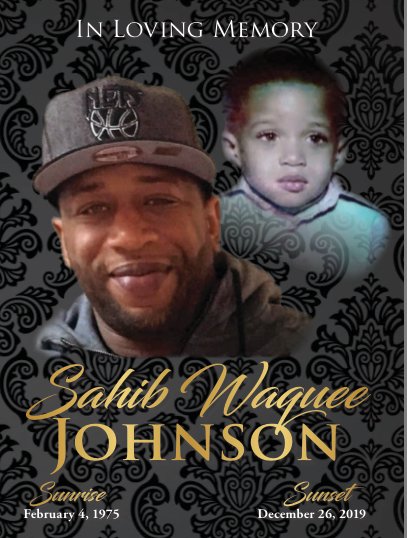 Sahib Waquee Johnson, 44, of Newark, New Jersey passed in peace on December 26, 2019. Sahib was born February 4, 1975 in Newark, New Jersey to Patricia Whitten-Williams and the late Frank Johnson Jr. Sahib was proceeded in death by his grandmother Willie Mae Williams, and cousins, Keshawn Garner, Hason and Jamil Williams. Sahib was the second oldest of four children. Sahib was enrolled in the Newark Public School District and finished his education in the West Orange Public School District. Sahib was gainfully employed with the City of Newark Housing Department. Sahib, A.K.A. Sah was a wonderful, caring and loving man. Sahib was very laid back quiet and always laughing. Sahib was known for his hazel eyes that changed colors with different color shirts he wore. Sahib was a family man. He loved to be around his family especially his children. His children, his mom, sisters, nieces and nephews was his world. Sahib was a caring man with a big heart. He would literally give you the shirt off his back! He loved spending time with his friends. He was well loved by many and will be greatly missed by all. May his soul rest in Paradise. He will always be an angel watching over the family. Sahib is survived by his mother, Patricia Whitten-Williams, step father, Dennis, his grandmother, Bernice Johnson, three sisters, Rasheima Johnson, Atiya Whitten and Crystal Williams. He also is survived by his six children; son, Raquan Sahib, daughter Neea’mya, son ShaQuan, son Shamil Johnson, son Jamil Johnson, daughter Sha Marie Johnson. Three nieces Taymeya Johnson, Asiya Whitten, and Amiya James, one nephew Sahir Whitehead and one great nephew, Kahsi Green. One uncle, Larry Whitten, two aunts, Doris and Christine Williams and a host of other family and friends. We love you Sah!
To send flowers to the family or plant a tree in memory of Sahib Johnson, please visit Tribute Store
Print
Saturday
11
January