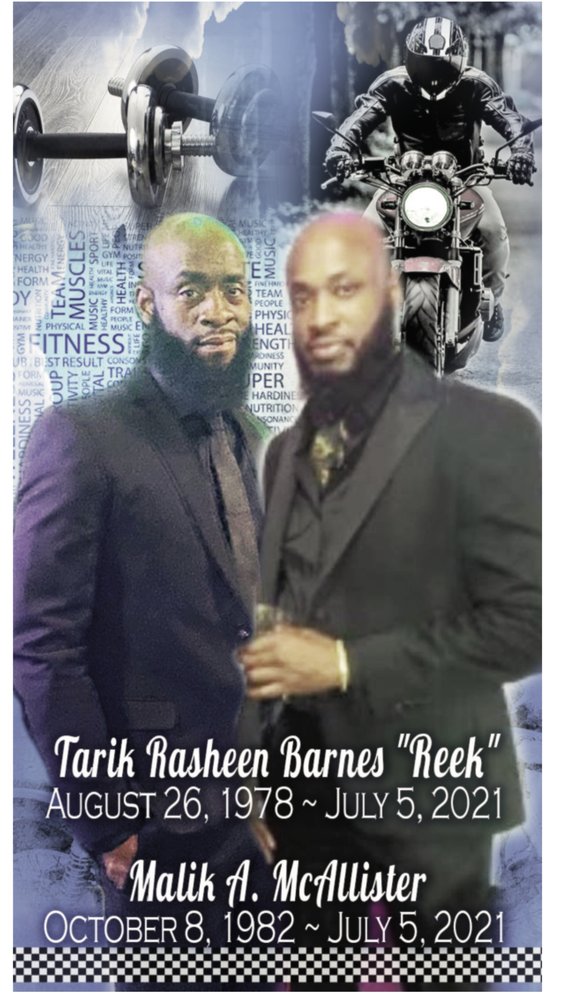 Please share a memory of Tarik to include in a keepsake book for family and friends.
View Tribute Book

Tarik Rasheen Barnes was born August 26, 1978. He was the son of Tyrone Bennett and the first
born son of Romain Barnes. Tarik was raised by his mother and stepfather, Marshall "Rasheen" McAllister

who preceeded him in death. Tarik along with his youngest brother Malik was called to eternal rest on July 5,2021.

Tarik or "Reek" as he was affectiontely known was the eldest of three sons. Tarik has two sons
Nasir Barnes and Zaire Barnes whom he was very proud and loved dearly. Tarik had also found
love and was preparing to marry his childhood sweetheart Shaunda Owens on August 18, 2021.

Tarik began his education at Grove Street School, then St. Rocco&#39;s Elementary and returned to
continue his education in Irvington Public Schools, where he received his High School Diploma
from Frank A. Morrel High School (Irvington High). At the time of his passing he was employed
as a security guard for Sterling Security.

Tarik had many passions. One that he was most passionate about was fitness! Reek was a
fitness coach for Herbalife Nutrition where he was climbing the ranks moving from distributor to
supervisor. He was working on acquiring his own Herbalife Nutrition Center as well. He was
dedicated to making the people he loved healthier "one shake at a time".  Tarik also had artistic
abilities and would sketch beautiful drawings in his spare time. You could find his love of Ol
School Rap translated in his art.

To send flowers to the family or plant a tree in memory of Tarik Barnes, please visit Tribute Store
Print
Friday
23
July