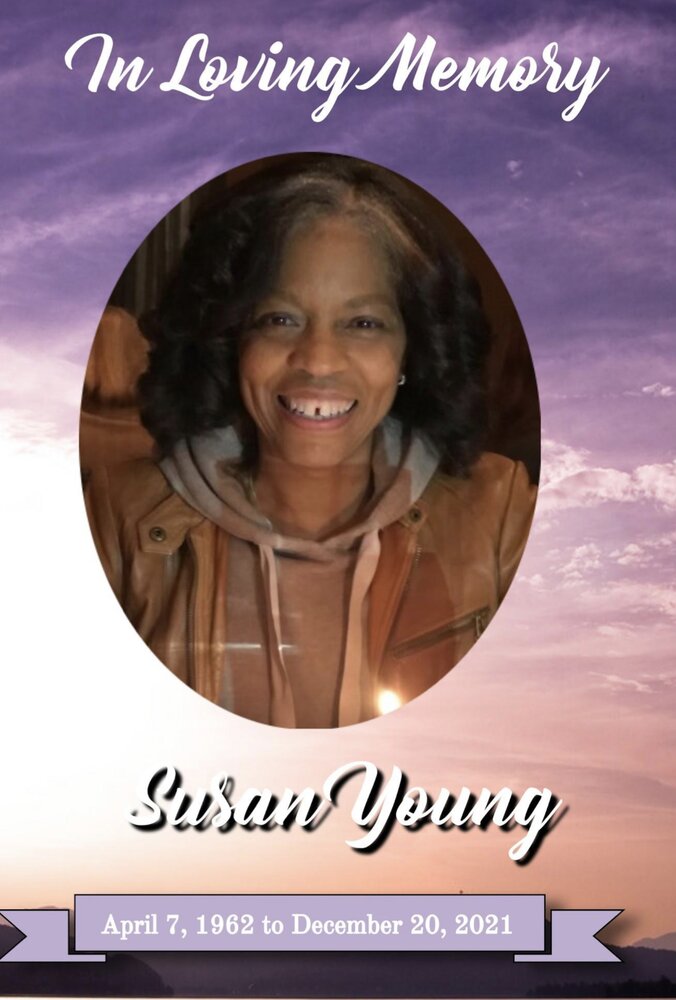 Please share a memory of Susan to include in a keepsake book for family and friends.
View Tribute Book

Susan Young was born April 7, 1962, in Elizabeth, NJ, to Elwood and Rose Pryor. She attended Elizabeth High School and went on to graduate from Montclair State University in 1984.
In 1985, Susan met, fell in love, and married Isa Abdul-Quddus. From this union they had two children, Rafiqa and Isa. In 1996, Susan purchased her first home in Union, NJ, and raised her children.
In 1999, she met Charles Young. That was also the year she found out she had kidney disease. Charles and Susan married in 2001. In 2003, Charles was diagnosed with stomach cancer and ultimately passed away, leaving Susan a widow.
After six years of dialysis, in 2005, Susan finally got a kidney transplant and did everything within her power to keep her kidney. She did every exercise you can think of and was unwavering in her daily routine. She maintained a very healthy diet, but most importantly, kept herself in good spirits every day.
Susan was employed for the State of New Jersey for approximately 33 years. Throughout her tenure she worked for the Division of Consumer Protection, Division on Civil Rights, and The University of Medicine and Dentistry. In 2017, she retired. During her retirement, she did what she wanted to do; spend all her time with her children. Motherhood was her greatest joy.
Susan was such a beacon of light. She lit up any room she walked into. Susan was often called “Ma” because she had so many “children in the streets”. She loved helping people but loved investigating even more. She was a strong Civil Rights advocate, enjoyed cooking and a sports enthusiast.
On December 20, 2021, Susan Young concluded her human experience. She was survived by her children, Rafiqa and Isa Abdul-Quddus.
Susan was very passionate about transplants and encouraged people to be organ donors. We ask that a donation to the National Kidney Society be made in honor of Susan

To send flowers to the family or plant a tree in memory of Susan Young, please visit Tribute Store
Print
Tuesday
28
December