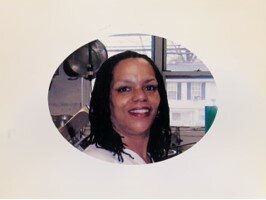 Please share a memory of Kim to include in a keepsake book for family and friends.
View Tribute Book

Kim Regina Haley (nee Carney) was born in Brooklyn, NY on August 7, 1955 to Carmen Carney and the late Reginald Lawson. Despite being born prematurely, she was “feisty” as described by her mother, and fought to stay in this world, as she did throughout her life until her transition on December 31, 2021.

Kim was a “Brooklyn Girl” until moving to Court St. in Elizabeth, NJ with her family at the age of 15. She attended Cleveland Middle School and in 1974 graduated from BattinH.S. where she made many lifelong friends.

She met Clarence Haley, Jr. through a friend. Seeing him in his service uniform, she was immediately smitten. They got married in 1983 and had three children together. Times were hard for the couple, so they eventually split in 1989.

Over the years, Kim spent most of her time as a homemakercaring for her children. She worked various jobs until finding her “second home” at Rahway Geriatrics Center, now known as Alaris Health. She spent 30 years there putting smiles on residents’ and coworkers’ faces alike, until falling ill and having to retire in 2017.

Kim spent most of her years in Elizabeth, Roselle and Rahway, NJ. In each of these places, she made friends that will remember her always. From childhood, Kim was just fun-loving. She always had a smile on her face and was full of life. She loved music, dancing and karaoke, so rarely missed an opportunity to have a good time or party. To aptly describe her, she was a“social-butterfly”. She loved cooking and gathering with family. She liked to be the center of attention and enjoyed any compliment that came her way. At the same time, she was reciprocally giving, caring and loving. She touched the hearts of many, leaving fond memories wherever she went. Kim was not wealthy in the monetary sense but had a more priceless wealth. She was rich with love and endearment from all those who have had the pleasure of knowing her and experiencing the essence that is Kim Haley.

To send flowers to the family or plant a tree in memory of Kim Haley, please visit Tribute Store
Print
Sunday
9
January