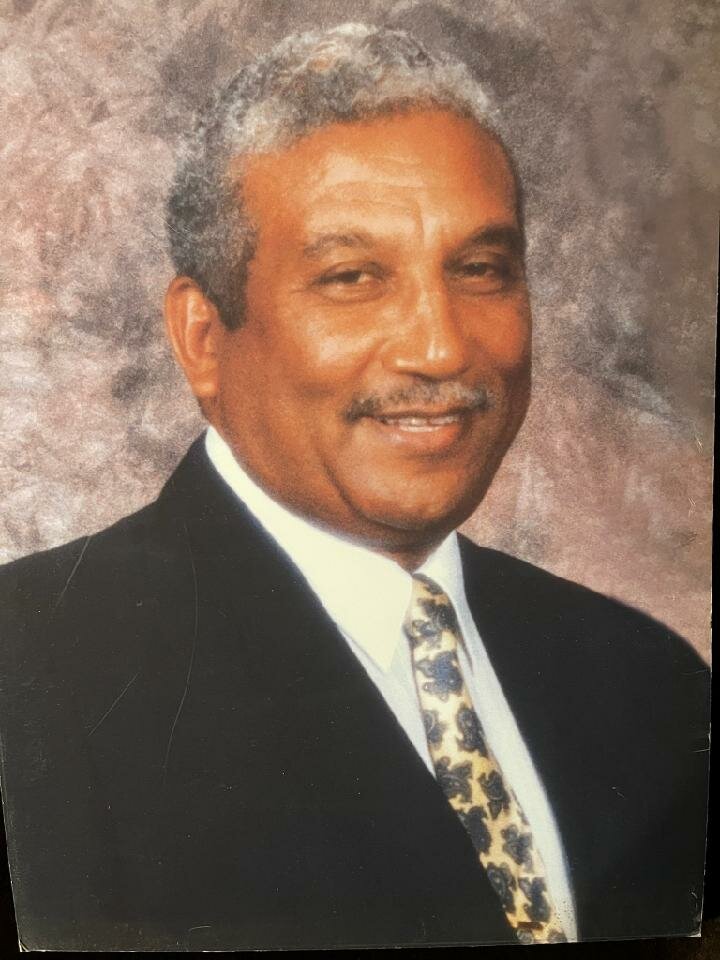 Please share a memory of Rhemus to include in a keepsake book for family and friends.
View Tribute Book

Rhemus Lee Holmes was born on August 7,1932 in Fairfield North Carolina to the late Dewey
Holmes and Dorothy Collins Terrell. He departed this life on Monday, September 19, 2022,
peacefully at home surrounded by his loving family. Rhemus, affectionately known as “Ray”
grew up in Columbia, North Carolina (Alligator County). He graduated from Tyrrell High
School in 1953. At an early age, Ray accepted Jesus Christ as his Lord and Savior. His strong
work ethic became evident at a young age, as he held various jobs while attending school. In
high school, he drove the school bus, was senior class reporter, participated in school activities,
and was voted most handsome boy.
In search of better opportunities, Ray enlisted in the United States Air Force in 1953 and served
his country for 4 years. He married his childhood sweetheart and love of his life, Essalene
Combs in 1956, and from this union four children were born: Deborah, Dwayne, Darlene, and
Darryl. In 1957, after receiving an honorable discharge from the Air Force, Ray and Essalene,
who he lovingly called “Lane” moved to Newark, New Jersey where they raised their children.
Ray was known for being outspoken and a fierce protector of his family. His desire to be a good
provider made him seek better jobs with competitive salaries and medical benefits. Ray felt a
“man” should always have a job and a wallet with money in it. He worked for Two Guys in
Harrison, New Jersey as a long-distance tractor-trailer driver. In 1967, he became concerned
with being away from his family and took a job with General Motors in Linden, New Jersey. He
held various positions at the company until retirement in 1992, after 25 years of employment.
Ray continued to serve his country by enlisting in the National Guard Army Reserves from 1972
until his honorable discharge as Sergeant in 1993. He was street smart, valued continuous
learning and could talk intelligently about any subject. He was a self-taught professor of life who
family and friends sought out for advice before making major life decisions. After engaging with
him, people were left with the feeling that they had gained nuggets of wisdom and life-long
lessons.
A devoted husband and father, Ray was the loving patriarch of his family. He was proud of his
children and grandchildren and was known for “bragging” about their accomplishments.
Ray also loved the city of Newark and his community. He served as Vice President and
President of the Wainwright Street Block Association. In an April 4, 1999 Sunday Star Ledger
article, he was called the silver haired self-proclaimed mayor of Wainwright Street. He was in
regular attendance at South Ward and City Hall Council meetings to ensure policies were
implemented for the betterment of his community. He ran for South Ward District Leader, served
4 years as Essex County Constable, and in 2001 received the Martin Luther King Jr. Community
Service Award.

A passionate man about his politics, Ray often proudly reminisced that he lived to witness the
greatest political event in history: the election and inauguration of Barack Obama as the first
African American President of the United States.
Ray joined Clear View Baptist Church and was a devoted member where he served on the
Trustee Board, drove the church van, opened the church doors, visited the sick & shut-in, and
actively participated in church events. He could always be counted on and thought it not robbery
to step in and help wherever needed at Clear View. Ray was presented with the Certificate of
Appreciation Award from the Men of Clear View on February 25, 1996 for dedicated service to
the church. On September 17, 2000, Ray was ordained as a Deacon, and served faithfully until
medical issues prevented him from attending services regularly. On February 27, 2016, he
received the “In the Spirit” award for his faithful and dedicated service with the spirit of the Lord
for Clear View Baptist Church, his family, and the community. On January 28, 2018, he was
appointed Deacon Emeritus at his beloved house of worship until his passing.
Ray was known for lending a helping hand to those who were less fortunate. He willingly
provided emotional and financial support to friends and associates in need. He served as a role
model and mentor to young men both in and outside of his family. He had a zest for life and
loved to socialize, travel, and debate current events. Ray was known as the life of the party at
family reunions and events. He was a sharp dresser and not easily forgotten if you met him.
Ray was preceded in death by his father Dewey Holmes, mother Dorothy Terrell Collins, sister
and brother-in-law, Leroy and Cynthia Bell, son-in law Olujimi Williams and brother James
Tabe Holmes.
His memory will be cherished by his loving and devoted wife of 66 years, Essalene Holmes,
children: Deborah Holmes-Williams, Dwayne Holmes (Audrey), Darlene Holmes (Varnell),
Darryl Holmes (Selina); seven grandchildren, Aigner, Maya, Shanel, Varnell Jr. (Shanie),
Fumilayo, Jihad, and Olujimi Jr.; one great-grandchild, Varnell III; two brothers, Jim Allen
Holmes and Tony Terrell and a host of nephews, nieces, cousins, in-laws and friends.
“I have fought a good fight, I have finished my course, I have kept the faith.”

To send flowers to the family or plant a tree in memory of Rhemus Holmes, please visit Tribute Store
Print
Friday
30
September