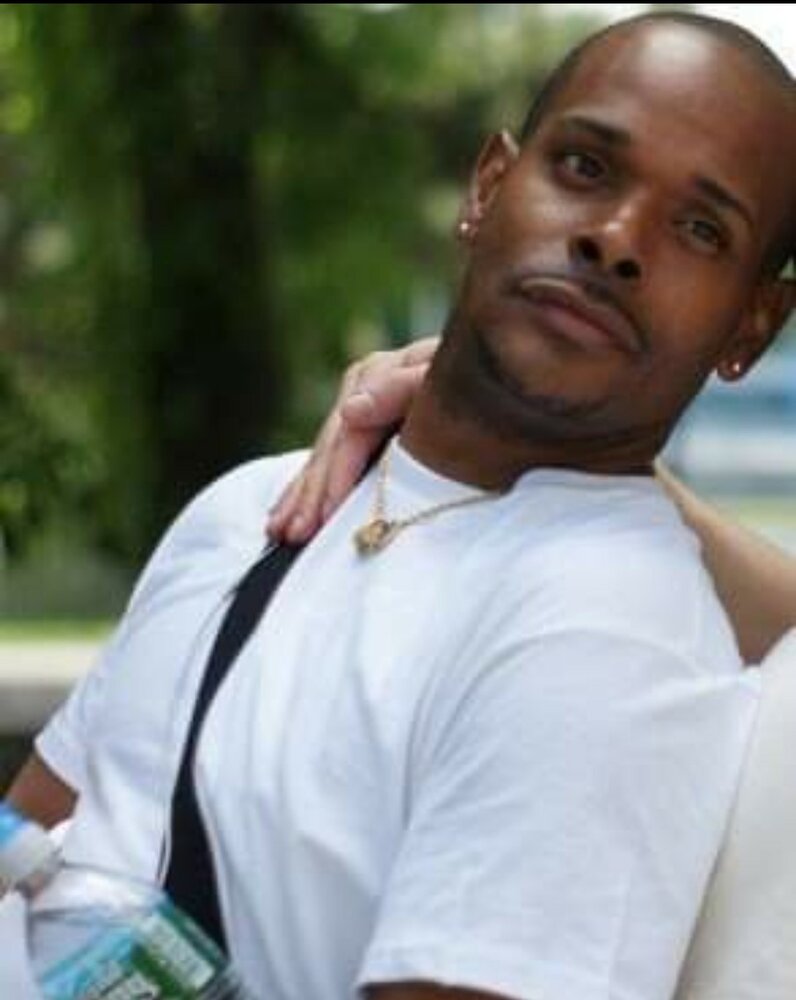 Please share a memory of Derrick to include in a keepsake book for family and friends.
View Tribute Book

Growing up in the Bedford Stuyvesant area, Derrick attended Erasmus High School from 1984 to 1987. Derrick proceeded to continue with his education through Job Corps, to where he became enlightened about himself.

As Derrick transitioned into self-discovery, he discovered voguing and the House Ballroom scene in the late 1980s. His natural athleticism and devotion to perfecting his voguing techniques made him an immediate standout at the nightclubs and social spaces frequented by the “ball children.” As a result, he was quickly snatched up by the legendary House of Penda’vis, one of the most respected ballroom houses of the period. Although the House Ballroom scene was still a relatively small NYC underground network at that time, Derrick’s arrival coincided with growing recognition of its cultural importance. Thus, it wasn’t long before outsiders noticed his talent, drawing him into the most significant cultural discourse of the period on the intersection of race, gender, and sexuality.

Even before the 1990 mainstream success of Paris Is Burning and Madonna’s “Vogue,” Derrick was already pushing cultural boundaries through voguing. In 1989 Derrick appeared in the music video for Queen Latifah’s “Come Into My House,” widely acknowledged as the first music video to feature voguing. As a hip-hop artist, Queen Latifah’s choice to showcase a dance style associated with Black and Latino gay men was a bold statement and a challenge to rap’s hyper-masculine image. That same year, Derrick appeared in the documentary Tongues Untied, directed by groundbreaking filmmaker and activist Marlon Riggs, an openly gay and HIV+ Black man. The film captures Derrick voguing at the Christopher Street piers, a popular gathering spot for the ballroom community. The documentary created a political firestorm when broadcast on PBS, prompting conservative Republican presidential candidate Pat Buchanan to call for the defunding of PBS. If Derrick’s voguing career had ended with these two projects, his place in the history of the House Ballroom scene would already have been secure.

In 1990, Derrick joined the House of Xtravaganza, forming strong bonds that he maintained throughout the rest of his life. As mainstream media’s initial fascination with voguing and the ballroom scene faded, Derrick committed himself to perfecting his voguing technique. As a result, he developed a reputation as a fierce competitor in the “New Way” style of voguing, a highly technical combination of gymnastics, contortion, and dance. In the 2000s, a new social-media-influenced generation rediscovered ballroom culture and voguing. Filmmakers and video artists again came calling on Derrick’s notable talents, with his appearance in Icona Pop’s “All Night Long” music video (2013), Jenn Nkiru’s short film En Vogue (2014), and the Netflix series The Get Down (2016). Photographers, too, made use of Derrick’s handsome physique and ability to strike seemingly impossible poses for features in Common & Sense (2004), Spank (2011), Vogue Japan (2013), and as a celebrity spokesperson for the NYC World Pride 50 campaign (2019). In addition, he contributed his talents to scores of charity and community events, including the NYC House Dance Festival (2008), the Jeffery Deitch Gallery Bring It event (2008), NYC Howl Festival (2013), HRC’s Turn It Up for Change benefit with Jennifer Hudson (2014), Respect the Runway event at the Museum of Modern Art/PS1 (2014), El Museo del Barro’s gala (2016), voguing in the windows of Bloomingdales NYC (2017), and the Aperture Foundation gala with Sister Sledge (2019). As ballroom culture and voguing became a global phenomenon, Derrick took on the role of international ambassador, including performing at the Vienna Life Ball AIDS benefit (2011), voguing showcase in  Hong Kong (2014), performances and workshops in Saint Petersburgh (2011), and appearing at World Pride Toronto (2014), and as a cultural ambassador representing the US State Department at Pride Peru (2022).

Despite the numerous photo shoots, videos, and international performances, Derrick never forgot his beginnings in the ballroom community or the many friends lost during the worst years of the AIDS crisis. In 2014, Derrick began volunteering with GMHC, the largest HIV/AIDS advocacy organization, leading voguing workshops that served as outreach programs to young Black and Brown gay men and trans women. In 2012, in recognition of his excellence and decades of contribution to ballroom culture, Derrick was inducted into the Ballroom Hall of Fame, the highest honor of the House Ballroom community. An Icon within the global ballroom community, Derrick’s influence will continue through the many with whom he generously shared his talent and joy for life.

To send flowers to the family or plant a tree in memory of Derrick Huggins, please visit Tribute Store
Print
Friday
16
December